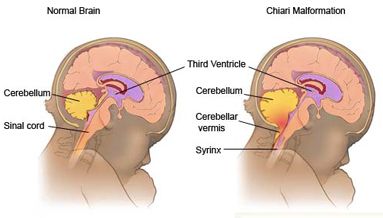 Arnold Chiari malformation (ACM) is the most common cause of central sleep apnea (CSA) in otherwise healthy children. Although there are several case reports and series reported on this topic, there are limited descriptions of the long-term course of these children after the surgical interventions. Posterior fossa decompression surgery to relieve pressure of the herniating cerebellum on the brainstem is generally thought to significantly improve CSA in most cases, however, there are very limited data on the natural course of CSA in children following decompression surgery. There may be a subset of children in whom it may take much longer for CSA to resolve, and in some it may not resolve completely. Hence, these children need to be followed closely with sleep studies to document resolution of CSA.

In the case report referenced, Dr. Abigail Strang and Dr. Umakanth Katwa describe a 10-year-old male with severe CSA who was subsequently diagnosed with type 1 ACM and underwent posterior fossa decompressive surgery. However after surgery, although there was improvement in his CSA, he still had a significant degree of residual CSA which required bilevel positive pressure therapy and took more than 7.5 years to resolve. This case report illustrates the need for close follow-up in these children and for providers to understand the natural course so they can accurately counsel families about expectations after surgical treatments.